Hot on the heels of the latest news that J. K. Rowling’s wizards used to shit right on the floor, we here at CatBagz.com have decided to do something new. We’re not quite fans but this is quite fictional so we call it ‘Fanless-Fiction‘. We sincerely hope you enjoy and do not inform any authorities.

Chapter 1: The Boy Who Pooped

Harry Pooper was a boy with a big dumb face on his big dumb head and currently on that big dumb face was a smile as wide as a jelly-filled swimming pool; All because he had a new found appreciation for Professor McGottago. During Harry’s first class of Defence Against the Dark Farts, McGottago had been an absolute bear.

For real. McGottago had spent most of the class as a North American Brown Bear, scratching herself against the classroom walls and groaning.

But today was different – today that wizened old witch had magicked herself into a skunk and promptly gassed Stinko Malfoy right in his mouth! Malfoy vomited tears out of his punk nostrils while the bell rang or whatever it is that lets people out of wizard class.

Harry caught up with his dork friend Ron Peesly.

‘Wuts wrong Harry?’ questioned Ron as he prepared some exposition ‘You still thinking about that toilet Craprid took out of the Bank for Professor Poopledore?’

‘Yea’ Harry hurriedly responded because I’m writing this by hand and anything better has slipped my mind.

‘Lets go tell Poomionie about it. She stereo-typically enjoys both books and knowing things.’ Ron suggested halfheartedly because this is only the first book and there are still several more to go before these two are snogging like fish in a watermelon.

Harry agreed with the idea because it was that or spend another night looking out the window like the lead singer of the Cure.

Poomione could be found in the magic library where they store magical stuff like books and microfiche. The boys found her quickly because everyone else in this scene was doing something transparently dumb.

‘OY! POOMIONE!’ Ron shouted like the oblivious idiot he is.

‘Ron! Let me act all parent-like because I’m the responsible foil in this story. Stop freaking shouting you are in a freaking library.’

Ron pressed on like a freight train full of baby whales.

‘What do you know about old magic toilets?’

For once, Poomione was stunned by her own ignorance on the subject.

‘I don’t know. Lets look at some books.’

We do not promise this will continue. 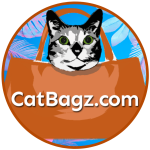 Sunday Rerun-day: Dinner and an Ungulate

Supply your email address below to subscribe to blog updates from CatBagz.com:

You have successfully subscribed to CatBagz Blog Posts!

There was an error while trying to send your request. Please try again.